skip to main | skip to sidebar

Two months from now, we will be more than halfway through the filming of Favor, a project I became part of one year ago this week. The year has brought lots of changes. More people, more funding--for me, a different part. The important things remain the same--the heart, the dedication, the strength of the story. Since I've done a crap job explaining that story in past posts, here is a more official synopsis...

Favor
No divine edict can be undone...

A comic book writer questions his sanity when he finds the villains and monsters he created have come to life.

Kevin West, a famous comic book writer and illustrator, has created an intricate and dark story set in a fantastical realm which is cursed with eternal night. The Darkwoods is a place where magic and creatures of legend still reign. Here sleeps Kyma, a titan of the ancient world, who was banished to a watery prison for betraying the gods. She is worshiped by a Darkwoods gypsy cult, led by their villainous shaman Odysseus Lejune, who will stop at nothing to awaken their ancient queen from the unearthly depths.

The only people that stand between the murderous Lejune Clan and the rest of the unsuspecting world are the heroes of Kevin's comic book saga, modeled after himself, his niece, Rachel, and his fiance, Summer. Detective Brooks and his 13 year-old spitfire side-kick, Maggie, are determined to stop the Lejunes from performing the ritual sacrifice of his love, Eleni, to free Kyma.

When his fiance is kidnapped, Kevin begins to disintegrate as he discovers her captors are the villains he created. Now he must take up the mantle of the hero he wrote and face his alter ego's arch nemesis in an attempt to rescue his fiance, his niece...and his sanity.

So who am I in all this? A murderous Lejune, the favored daughter of Odysseus, Cassiopeia.
Posted by Aimee Thomas at 1:57 PM No comments:

House of Wax and more

Despite my previous post disavowing a predilection for horror films, I've been watching some of the top 100 horror movie moments as brought to us by Bravo. (Could be a really old list--I don't know. I stumbled onto it watching Silence of the Lambs clips--long story.)

Some I agree with. Some I'd never seen. And one reminds me of the first scary movie I (think) I remember ever seeing.

Let me preface this by saying that many of my most well recollected memories have turned out to be at least partially fictitious. But in my defense, I believe them fully. As I do this memory.

When I was about 5, we lived in a century-old house in North Kansas City, Missouri. (The house wasn't creepy, btw. Nice house.) We walked to a neighbor's house, which I believe was in the same direction as the church we also walked to every Sunday morning, past a tree that rained purple berries that stained the sidewalk that was flanked by a chain link fence. (All this to show you how real these 'memories' are...)

I think we ate dinner at this house, and afterwards, my parents and their friends settled down to watch a movie on tv. This was long before even VHS players in every home, and this movie was black and white. (God, I don't know if their tv was. Different story.)

For years and years, I didn't know the name of it. All I remembered was that this creepy guy (who ended up being Vincent Price), was capturing people and dipping them in wax and putting them in a museum. And I think some lady walked in and recognized her relatives and started screaming or something. Anyway. It was deliciously macabre. At least for this five-year-old. Until we had to walk home in the dark.

So, the first horror movie I ever saw was House of Wax. The real one. And I think it joined the very Grimm fairy tales, the Roald Dahl stories and, eventually, Stephen King, into one dark, dark vein in my brain.

Oh! And considered not horror but "Crime Fiction" with enough horrifying elements to keep you enthralled, check out "Out" by Natsuo Kirino. Great read. One more recommendation? This is years' old now, but if you haven't read any of King's son's work, Joe Hill's Heart-Shaped Box is great fun.
Posted by Aimee Thomas at 3:42 PM No comments:

My brother and I were talking about the timing of projects I've been working on over the past year, and how odd it is how things come together and go out. Right now, there's a surfeit of blood. To the point that I've been asked if that's all I do. The projects over the next year will balance that out a bit--so casting directors? If you're afraid I only do gore, please reconsider. I promise I can emote without screaming.

Oh, and this isn't my brother. This is Lynn Crecelius. He's an actor. My brother is a kick-ass clothing designer and entrepreneur in Boston. His store, Proletariat, is where you need to look.
Posted by Aimee Thomas at 7:29 PM No comments:

This project is unlike any other I've been involved with. It's a true labor of love for so many of the people involved--many of the cast and crew have worked on projects with each other for years, and the love and respect they have for each other is palpable and translates onto film.

It's also chock-full of undiscovered talent. Make-up/special effects artists who rival anything I've seen (see work above). Costume and set design that is otherworldly. Leadership who can pull the best out of cast and crew, and an honesty in relationships that's only possible when the cast really trusts and respects each other.

It's going to be awesome.

And for just a touch of the girly? Tried on my costumes today, and hot damn are they awesome. Seriously. I want to put them on now and wear them until the film is done.
Posted by Aimee Thomas at 7:15 PM No comments: 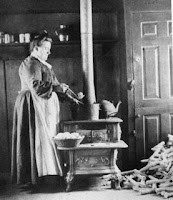 So. My last teacher was big on: "Don't be an extra. Don't sell yourself short. Hold out for the part, and if there's no part, go after a different part." Or that's how it seemed to me.

But here's the deal. A few years ago (quite a few), I had the chance to be an extra for Friday Night Lights (the movie). And they wanted me on set for a week. But I was to start a new job that week, a non-acting job, so I told them I couldn't do it. And I was disappointed.

So when I heard that extras were being cast here for two brother filmmakers that I love, on a period piece--a Western!--that would entail period-accurate costuming, hair and make-up, I thought--man, I'm doing it.

And I went to the casting call wearing only the bare minimum make-up, and they told me it was too much. So I went to the bathroom, washed my face with the wall-mounted hand soap and the brown paper towels, and came back, all red-faced and blotchy, and they said--better. We don't want pretty. ;)

So I stood against the wall and had my picture taken and tried to look as pathetic as possible. And still I thought--there's no way. Because the woman kept saying my eyes were bright, and that wasn't a good thing.

So when they called, I was shocked. And I thought, I'm totally doing this.

And because I'm not all informed about period-specific clothing, I knew nothing about:
-the black, heavy, burlap-textured tights you fold around a band around your lower thigh
-the lace-up pointy boots
-the crinoline
-the breath-impairing corset
-the UGLY green calico farmer dress
-the brown leather gloves--gloves! In Texas! In May!
-the plaid woolen shawl
-the total lack of make-up

And ta-da--a costume so magic it makes you automatically as miserable as if you actually did live in the wild west in real life--ie a woman surrounded by rough men, expected to cook and clean and care for animals and care for everyone else and never rest.

Totally, totally cool. So my sig other and I were at the LBJ ranch today, and on the ranch is an 1870's farmhouse which was PERFECT for imagining where I might live. And right up the road there was a kitchen that, while set up to be 45 years later, still gave some insight into how hard it was to cook back then--well, compared to now--and this is going to be SO fun. I can't wait.

Although leave it to the brother to point out the too obvious. In regards to my being chosen for this film: "Hmmmm. I'm not really sure that's a compliment. Don't they always cast people who are slightly odd looking?"

Yes. Guilty as charged.
Posted by Aimee Thomas at 6:23 PM No comments:

From the Reel: Aimee in Action